It is bread with unleavened flour. There is a variety of Indian fry breads too. 'Roti' is the common name for Indian breads. 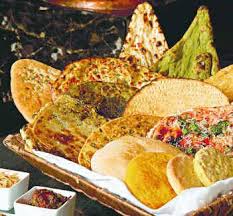 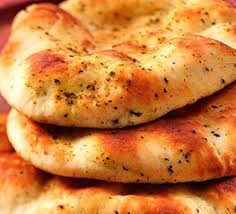 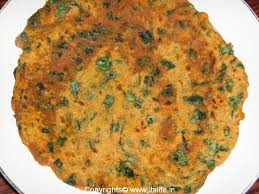 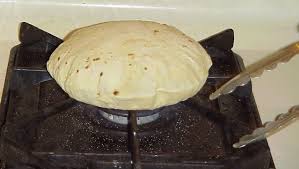 These whole grains are ground to get coarse or fine flour depending on what kind of roti is to be made.

Some of these whole grain flours are available -ready to use- in the neighborhood grocery shops or super markets but many households also get their whole grains ground in the nearby flour mills.

Sometimes the whole grains or the whole grainflours are mixed to make breads which make them tastier and more nutritious. Soya bean is added to Whole wheat to improve its protein content when sending to the flour mill.

Some mixed grain breads are : Methi Paratha , Palak Paratha where rice flour, jowar flour, gram flour is mixed to make the texture and taste different. It adds to the nutrition too.

Mixing plain flour is a personal choice. I prefer to use whole wheat flour as it has more fiber and contains more nutrients compared to plain flour.

Bhakri, a flat bread is made with jowar, ragi, bajra. It is made without using any fat and is easy to digest. It is very tasty too. It is a great help when you want to reduce weight.

Jowar flour is also used to make Thalipeet, a breakfast or snack flat bread, in Maharashtra and northern parts of Karnataka.

Ragi(finger millet) is used more in the southern states and in Maharashtra, a western Indian state to make Bhakri(flat bread). 'Ragi flat bread' is called Nachanichi bhakri in Marathi. In Karnataka,Ragi rotti is made as a breakfast or snack. Ragi balls (Ragi Mudde) are made and served with soppina saru or mussup( a greens and lentil curry) for lunch and dinner in the rural areas.

A porridge made with flour made with sprouted ragi is used as baby food and is also good for elderly people as it is easy for digestion. Ragi halwa is also made with this sprouted ragi flour.

Some Indian bread recipes are common in all the regions in india, such as chapati, poori.

Rice, which is a staple food of the southern states, is ground to fine flour in the flour mills and this rice flour is used to make bhakari in the costal regions of western Indian and to make akki roti in Karnataka. Rice flour is used for making different kinds of dishes, snacks including breads.

Phulka or pulka is another commonly made, easy to make Indian flat bread roti. It is a favorite of those watching their fat intake as there is no oil added as in chapati. It is a no fat, low calorie version of chapati. It should be eaten hot.

You can mix the dough and keep it in the fridge for 2-3 days. It takes only a couple of minutes to make a phulka.

The trick to get soft fluffy pulkas is to roll them evenly. Cook them on medium flame. If you are new to making these rotis, you may or may not get them perfect the first time. Keep making them and you will surely get them

Brush off the extra dry flour if any when you finish the rolling.

Keep the rotis covered till you are ready to serve.

When the roti puffs up, it means you have made a perfect roti.

You may add a little ghee, butter or oil on it if you wish perfect.

A Very popular Indian Fry Bread, Poori(also spelt) puri, is wickedly delicious. There is a variety of puri made.

I always use whole wheat flour. A little semolina or gram flour can also be added if you like the puris a little crisp like I do.

By adding a few other ingredients, you can vary the taste, color of the puri. Such as Masala-Poori, Palak-Poori , Bhatura.

You can mix the dough and keepin the fridge for 2-3 days and make puris whenever you want. You can also take this indian fried bread with you when you go for a picnic as puris can keep for a day or two.

Palak poori, also spelt as Palak Puri, is made with spinach and whole wheat flour.

You know spinach is good for you and your family. But you really can't expect the kids to eat that boiled, tasteless spinach as you don't like it yourself. So you need Pop Eye to convince the kids to eat spinach. And that works only as long as they are young.

Make Palak-Poori and You won't need Pop Eye. The kids as well as the grown-ups will love the colorful Palak puris. And you will love them (I mean the Pooris - kids... you love them anyway).

You can make this dough and keep it in the fridge and make pooris as and when you need. You can also pack them for lunch to school or office or when you are going to a picnic. They taste good for a day. Pooris are best when they are hot. And the aroma is wonderful.

Serve hot with curry or chutney or pickle or ketchup.

Palak puri is good to eat just by itself too. It is a good item to take for lunch for picnics as well as lunch. At parties it adds color to your table.

Bhatura is a popular Indian Fry bread. It is made with plain flour and is soft. It goes well with chick pea curry(also called chole or chana masala) and is served in restaurants as chana-Bhatura. It is available in the restaurants and is generally served at dinner time or as a snack. Chickpea curry is also known as channa masala or chole. It is a popular Indian Curry. You will find it in almost all restaurants.It is easy to make vegetarian curry.

Chickpeas are good for you and they are also part of comfort foods.

Chana Masala is generally served with Indian Breads such as :

Poori, Chapati, Bhatura etc. Many restaurants serve Chana - Bhatura as a snack or a dinner item. I like to make this chickpea curry with lots of gravy.

We are using the white big sized drychickpeas, called Kabuli chana, for this curry. Do not use the brown or black chickpeas for this.

Channa Masala is ready. Garnish with more chopped coriander leaves, onion rings. Serve with any Indian Breads, Such as